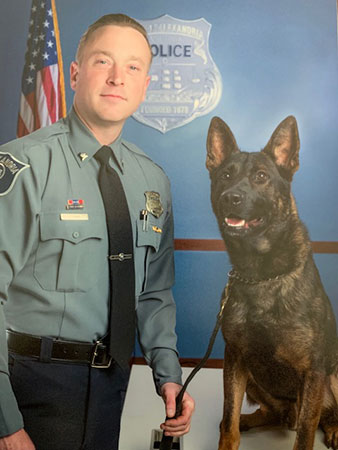 As part of an ongoing investigation into the distribution of cocaine by the suspect, members of the Alexandria Police Department Vice Narcotics Section obtained search warrants for the suspect’s person, vehicle, and a residence related to his cocaine distribution.

On January 31, 2020, members of the Vice Narcotics Section planned an operation in which the suspect would be detained so that the warrants could be executed.  Members of the Alexandria Police Department Special Operations Team (SOT) were employed to conduct the detention of the suspect and the execution of the warrant on the residence.  Officer Egan and his K9 partner, Crash, were attached to the SOT element specifically responsible for detaining the suspect.  Information was obtained that the suspect was known to possess a firearm and carry it with him to protect his cocaine distribution enterprise, thus further making the detention of him a high-risk operation.

At approximately 1210 hours on January 31, 2020, the suspect was observed at the Alexandria Exxon gas station located at 703 N. Washington Street.  The determination was made to attempt to detain the suspect while he was outside of his vehicle to lower the risk of a vehicle pursuit.

Sergeant Jason Story, Officer Robert Opsut, Detective John Brattelli, and Officer Egan and Crash were riding in an unmarked vehicle together.  Sergeant Story drove the vehicle to the front of the suspect’s vehicle and got out of the car and began giving him commands.  Immediately, at the sight of law enforcement, the suspect engaged in headlong flight northbound through the parking lot.  Officer Egan deployed from the vehicle with Crash and made an announcement for the suspect to stop, which was ignored.  Officer Egan deployed Crash to apprehend the suspect which he did by catching him in the parking lot by his left arm.  The suspect began to fall to the ground and was pushed by Officer Opsut, who was also engaged in the foot pursuit.  As the suspect hit the ground, Crash reengaged with his left chest area and remained on the bite until Officer Egan removed him, allowing Officer Opsut and Detective Brattelli to place him in handcuffs.

Once in custody, members of the Vice Narcotics Section conducted a search of the suspect and his vehicle.  Unable to locate any contraband, they again called upon Officer Egan and Crash to conduct a narcotics sweep of the suspect’s vehicle.  Officer Egan deployed Crash into the vehicle who immediately alerted to the presence of contraband near the center console of the truck.  Further investigation revealed a soda can with a false bottom.  14 grams of crack cocaine were located in the bottom of the can.

The suspect was treated for minor injuries and subsequently charged with PWID Cocaine.

Officer Egan and Crash prevented the attempted escape of a dangerous drug dealer who was known to be armed.  Furthermore, K9 Crash located the entirety of the contraband related to this incident in a place hidden from regular observation.  Without the efforts of Officer Egan and K9 Crash, the suspect may have escaped and/or not been charged due to the tradecraft employed to conceal his illegal narcotics.