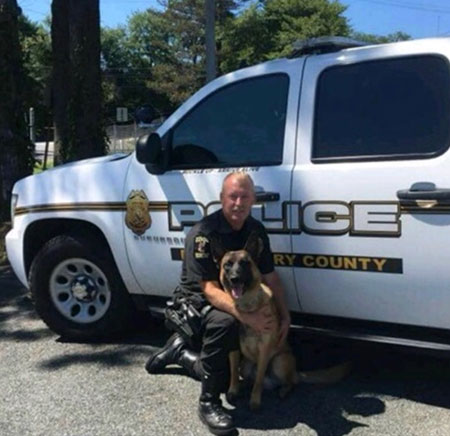 On 1/26/2020, Montgomery County Police units received a stolen vehicle report in the 6th District. Over the course of several hours, officers were able to determine the suspect driving the stolen vehicle was armed and had committed multiple crimes across several districts. At approximately 1349 hrs., an alert MCPD 3rd District officer observed the stolen vehicle in the area of Piney Branch Rd and New Hampshire Ave. A vehicle pursuit was initiated. At one point during the pursuit, the suspect rammed and disabled a marked police vehicle and attempted to run over a police officer.

The pursuit, while short in duration, came to an end in the area of North Hampton Drive and Beacon Rd where the stolen vehicle became disabled. The suspect immediately fled on foot. Officers then gave chase on foot. Officers were able to maintain a visual on the suspect.

PO3 Gil Fones continuously monitored his radio throughout the event and as a result was in the area when the pursuit was initiated. Officer’s on the perimeter directed PO3 Fones to the 9300 Blk of Piney Branch Rd where they had a visual of the suspect running through the woods. The suspect, not seeing the perimeter officers, began to run in their direction.

At the location the suspect was last seen, K9 Justice picked up a clear track which led up a steep hill towards a residential neighborhood. While tracking, K9 Justice and PO3 Fones located an article of clothing believed to belong to the suspect. PO3 Fones and K9 Justice continued to track the suspect up the steep hill. While nearing the top of the hill, K9 Justice took an immediate turn towards a large embankment. The embankment, approximately 8 feet high, had a large tree growing from one side and a large rock on the other. Furthermore, at the bottom of the embankment was a pond of water approximately 2 feet deep. The terrain features, as well as the presence of the large rock and tree provided the perfect cover for the fleeing suspect. While the suspect was able to use this location to hide from sight, he was unable to avoid the keen nose of K9 Justice. K9 Justices’ abrupt turn towards and down the embankment was K9 Justice tracking the suspect to his hide-out. After descending the large embankment, K9 Justice located and engaged the suspect who was still obscured from PO3 Fones’ vision. As K9 Justice engaged the suspect and fearing for K9 Justices safety, PO3 Fones had to traverse the steep embankment which was littered with rocks, logs and other debris. Eventually PO3 Fones was able to see K9 Justice and the suspect. The suspect was in a position which allowed him to kick at K9 Justice, preventing K9 Justice from getting a firm grip. The suspect then put his hands up in an apparent attempt to surrender. PO3 Fones immediately recalled K9 Justice. K9 Justice immediately returned to PO3 Fones as he radioed other officers to his location. The suspect remained passively non-compliant however presented his hands in a surrendering posture. As PO3 Fones’ back up arrived,  PO3 Fones and K9 Justice maintained verbal (and barking) control of the suspect. This control prevented the suspect from again attempting to flee.  Unfortunately, when backup officers arrived, the suspect became combative and refused to be taken into custody. Given the difficult location and number of officers involved in taking the suspect into custody, PO3 Fones made the correct decision to not deploy K9 Justice. Had PO3 Fones deployed K9 Justice it was very likely another officer could have been bitten and injured causing more chaos to a rapidly deteriorating situation. PO3 Fones recognized that at that point, the safest thing to do was provide coverage in-case the suspect was able to break free of officers and attempt to flee. PO3 Fones was also able to ensure additional incoming resources were updated on the situation via radio communication.

After a violent struggle, which involved several assaults on officers and two taser failures, the suspect was ultimately taken into custody. It was later determined that in addition to the theft of the vehicle, the suspect had committed several acts of vandalism, several assaults and was the primary suspect of a rape which had occurred earlier in the day.

PO3 Fones and K9 Justice were instrumental in the apprehension of this dangerous subject. After navigating very difficult terrain for just under 1.5 miles, PO3 Fones and K9 Justice maintained their dedication to locating and apprehending this dangerous criminal and protecting the community of whom the suspect showed a reckless disregard for. Furthermore, after locating the hiding dangerous suspect, despite being tired wet and cold, PO3 Fones remained professional and displayed an enormous amount of restraint which resulted in a successful conclusion to an extremely dynamic track.

PO3 Fones and K9 Justice exemplify what it takes to be a dedicated, hardworking and professional K9 team in our region.